When a huge floating gyre of plastic waste was discovered in the Pacific in the late 1980s, people w… 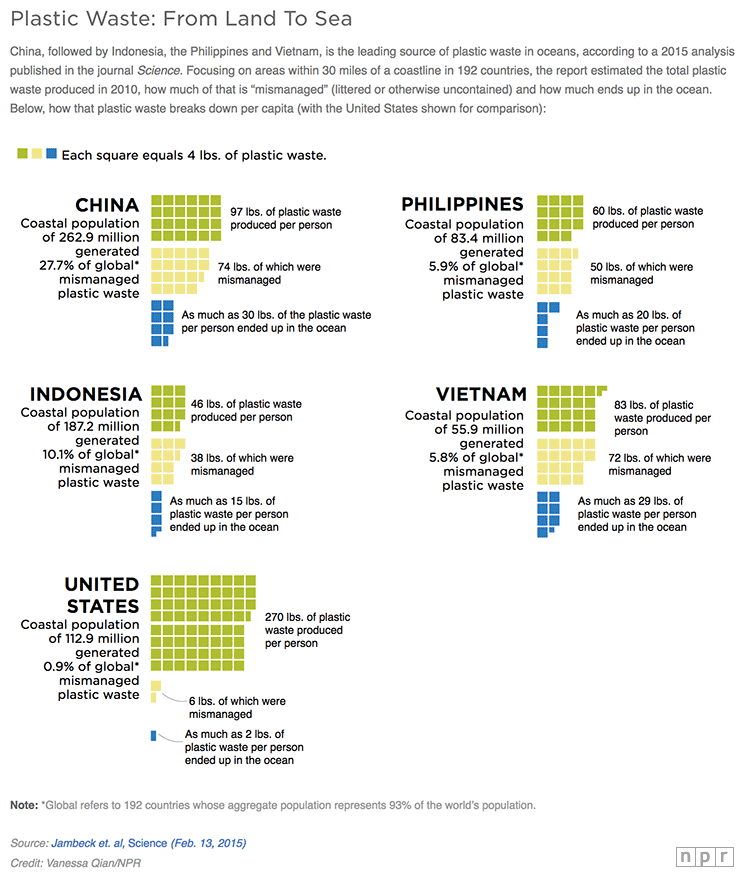 When a huge floating gyre of plastic waste was discovered in the Pacific in the late 1980s, people were shocked. When whales died and washed ashore with stomachs full of plastic, people were horrified. When photographs of beaches under knee-deep carpets of plastic trash were published, people were disgusted. Though some of it came from ships, most, presumably, was from land. But how much was coming from where? No one really knew until 2015. That’s when Jenna Jambeck, an environmental engineer at the University of Georgia, did the math. Her groundbreaking study suggested there was hundreds, and perhaps thousands, of times as much plastic washing into the sea as people were seeing in those ocean gyres. Jambeck’s findings helped galvanize a worldwide movement to stop plastic pollution. She worked with a team of scientists at the National Center for Ecological Analysis and Synthesis in California to find the sources of all that plastic. Their seminal paper, published in 2015 in the journal Science, produced new information and astounding numbers. Most of the trash along beaches and in the ocean is single-use plastic, Jambeck says — cigarette butts, grocery bags, bottles and caps, straws, utensils and packaging. Historically, most of it has been produced in the West, but China is now the top producer, and exporter of plastic goods. Many countries, including the U.S., contribute plastic pollution, and it all adds up. For example, in 2010 alone (the year’s worth of data that Jambeck’s Science study was based on), a total of 8 million metric tons of plastic entered the world’s oceans. The research made a big splash. In 2017, the Senate Environment and Public Works Committee invited Jambeck to testify about the problem. Holding up a bag full of plastic trash, she explained to the senators that 8 million metric tons of plastic is equal to “a volume of five grocery-sized bags filled with plastic for every foot of coastline in the world.” She predicts the “8 million” could be 10 times as large by 2025, if current trends continue. Half of the waste comes from China, the Philippines, Indonesia and Vietnam. (Note: Though Vietnam puts nearly as much plastic into the ocean per person as China does, the Chinese population is so much greater than Vietnam’s that China’s overall contribution to total plastic in the ocean is much larger). All these countries have growing consumer economies and haven’t yet developed widespread and efficient methods of waste management. And they have lots of ocean-facing shoreline. Research shows that the population density along the shoreline largely determines how much trash winds up in the ocean there: more people, more trash. Graphic: Vanessa Qian/NPR